A true B.C. girl, Julie Jeffrey is one of the up and coming stars on the West Coast joining the Discover Hockey program this upcoming spring. We sat down with her to find out more about how she got into hockey and what her hopes are for the season.

DH: So Julie, did you grow up with hockey?

JJ: I live in Richmond, B.C. but I grew up in Cranbrook. It’s big hockey town, and a few NHL players have come from there [anyone heard of a guy named Steve Yzerman?]. This is not why I wanted to start to play hockey though. I did not have any desire to learn to play or have hockey a part of my life then or even into my 20’s. So you ask why, at my age, would I want to start to play hockey? Well, as a mom of two lovely hockey-playing girls and a wife of a hockey-loving husband I may have been bullied into it… They love me. What can I say? 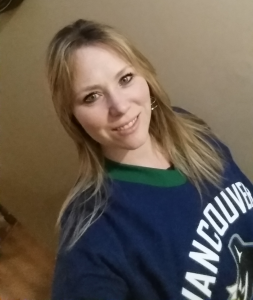 DH: How did you get the hockey bug?

JJ: My husband found out that one of our daughter’s female coaches played on a women’s ice hockey team. He inquired as to whether they would take a newbee. He returned home to tell me that it was a possibility that I could play. I got a little scared – did I mention that I can’t stop and that my tyke level daughter can skate circles around me? Oh yeah, and my atom-aged daughter thinks it’s funny that I don’t bend my knees when I skate. The next practice I saw this coach and she smiled at me but didn’t ask. I got up the courage to ask her if it was true that they would take someone so new. She then proceeded to email the organizer of her team immediately to see if I could join.

The next emails and texts were crazily welcoming and that it was okay that I had no experience, equipment or idea of what I was getting into. So, two weeks later, I joined a female hockey team! The ladies are AMAZING – the best cheer leaders ever, and so wonderful. I have played for ¾ of a season and they are still wonderful. I realized then that I needed to do something to allow them to keep me on the team for next year. They are seriously the most amazing group of people ever but my skills are weak. I can now stop on one side and have only levelled a few lovely ladies on other teams because I can’t stop very well (I may have taken out a ref… Another ref may have come over told me I looked like I was “swimming out there”). So, now it’s time. It’s time to really learn hockey!

DH: What would you say to someone who is sitting on the fence right now and is thinking of taking the Discover Hockey program?

JJ: I’m diving in, and have no real experience other than flailing on ice, so why can’t you? You wear gear, they really won’t recognize you after you get off the ice!

DH: So being from Cranbrook, are you a big Yzerman fan, or who is your hockey idol?

JJ: I don’t have one favourite hockey idol, I have respect for many players. They all work hard, they all train hard, AND it’s harder than it looks!

… Ok, my idols are my family because they got me into it! But I’m not going to pick favourites.

DH: Yeah I get that, it’s hard to pick favourites when it comes to family… Except for the Gretzky parents, I’m pretty sure even they would pick Wayne over Brent and Keith (sorry guys). What’s your favourite hockey team, movie, and song?

JJ: My favourite team is the Canucks. Movie is Mighty Ducks. Favourite song is Hockey Night in Canada. It brings back memories of my Dad and Grandpa watching hockey on Saturday night.

JJ: I would choose Jennifer Aniston. The story line would be the average mom, facing that fact that she is getting older and wants to prove that she can learn new things while making a fool of herself and having fun.

DH: Wow, that’s good! You sure you don’t have a background in directing? What’s your prediction about who will be the Stanley Cup final and who will win it this year?

JJ: Sadly, it will not be the Canucks. So, I can’t make a prediction.

DH: That’s a true fan there. I don’t think many people in Canada will want to make a prediction this year. Where would be the most exotic place you’d want to visit and play hockey at?

JJ: Japan because I think the women there should play too!

DH: Imagine this, you wake tomorrow and you are the NHL commissioner for one day, you can do whatever you want, what would be your first act?

JJ: I would require each NHL player to go and inspire the old as well as the young to go out and try playing hockey.

DH: If you could click your skate blades twice and make any hockey wish come true, what would you wish for?

JJ: I would score my first goal, while lifting the puck, on a breakaway and then be able to stop before I hit the boards, ref, or other player when I’m done. 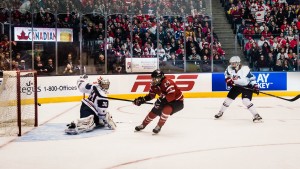 DH: Sounds like the Highlight of the Night! I wish you luck in accomplishing your goal. For your sake and the refs…

Best of luck in the upcoming season! Good job in having the courage to go for what you want! We’ll have to catch up in the future to see how you and your team is doing.