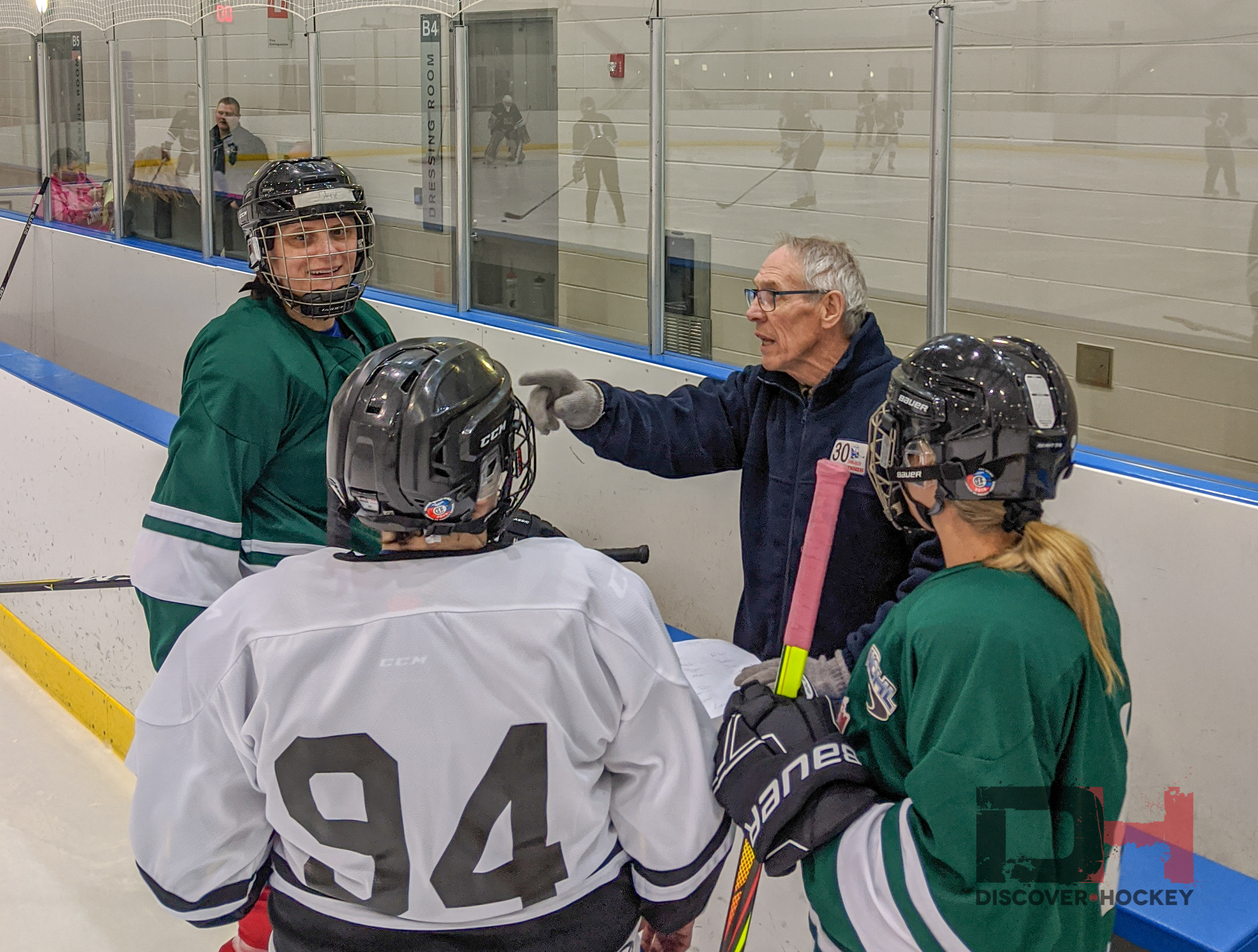 It feels great to be back to the blog this week! You may have noticed that I was MIA for week six of the program. Unfortunately my son came down with a bad case of croup and was at home sick for a week. Poor guy. Although I wouldn’t have traded in the snuggles for anything, I did have serious FOMO last week!

I connected with my friend Dawn and she informed me about how epic of a session it was. It’s amazing how much I have come to value “Monday Night Hockey” and how disappointed I felt to miss out.

So, let’s talk about week seven! It felt great to be back. My son was on the mend and I was more ready than ever to hit the ice again.

The session began with our usual warm-up and then we quickly moved into some skating drills. We practiced turning both clockwise and counterclockwise around the face-off circles, using both crossovers and cutting. It was interesting to learn that everyone has a unique preference in regards to what feels best. Some people really love crossovers, like myself, and others much prefer cutting. The takeaway for me is that everyone needs to figure out what makes them feel most comfortable while turning. This is an important skill to hone because making quick movements and changes in direction is key to being an effective hockey player.

It was exciting to witness the progress of my teammates. I noticed how all of us have increased in speed, confidence, and skill since we began just 7 weeks ago! It is true what they say about practice making progress and that with consistency, our skills will become more natural and second nature.

Between Discover Hockey sessions I’ve made an effort to skate at least 1-2 extra times each week, either during public skating at our local rink or going to Stick and Puck sessions with my husband and son. Getting that extra ice time has been hugely beneficial to my process. I highly recommend it to those of you who are looking to build your confidence in skating, starting and stopping, transitioning forwards and backwards, puck handling, and shooting.

After practicing our turning, we did some really fun and fast-paced shooting drills. The first drill had us skate down the centre of the ice, take a shot, peel off to the boards, grab a new puck and do it again. There was constant movement of the players and this energy was inspiring! This is not only a great and dynamic warm-up for us as players but more importantly, for our goalie!

The second exercise had us practicing a shooting drill in groups of five, much like we would find ourselves in a game situation. The object of the exercise was for the shooter to take a shot, and the remaining players get the rebound and shoot until they scored. Once the team scored, which happened very quickly in most cases (we have some seriously great shooters on our team!) they would move on and the next group would start.

After we wrapped up those drills we moved on to the best part of the session, the part I’d been waiting for all day, our scrimmage time! I think we scrimmaged for about 30 minutes but it felt like 5. As I’ve shared previously, I feel so alive and present while playing, that the time just flies by! There is nothing more fun than actually playing! 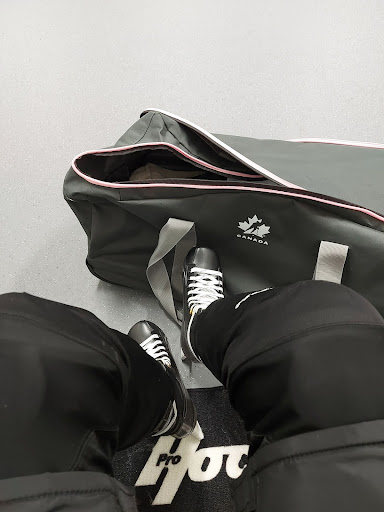 I played left wing that night and it felt really great! I love how active of a position it is, skating up with the puck, taking shots (or attempting to 😉 ), and fighting for the puck along the boards. I was really proud of a few solid passes I made, some breakaway opportunities, and getting better and more swift at stopping and starting.

It’s hard to believe that next week is our final ice session before we start playing exhibition games! It’s amazing how far we’ve come in such a short amount of time. As I look back, it honestly feels like I’ve been playing for a year! That is how quickly we learn and progress as hockey players through this program.

And let me remind you, I have never played hockey before in my life! I’ve skated since I was little but never played the sport. It is true when Coach Jeff told us during our orientation that we would become real hockey players by the end of this program!

The Discover Hockey program is designed for people who have never played and it truly provides the tools to equip you to be successful.

The coaches, Jeff and Jeff, and our mentors, including Darcy and Patrick, have been fundamental to our success. Their leadership, camaraderie, and support have been key to our success! They inspire us, encourage us, and challenge us to grow in new ways. I appreciate how each of them have consistently shared small yet fundamental ways to help us improve and have offered feedback that allows us to grow as hockey players.

If you’re feeling inspired to learn how to play hockey, jump on the opportunity today! I promise you, you won’t regret it!

See you next week!

If you are reading this and thinking to yourself that it is time for me too to try hockey, registration is open now in Calgary, Edmonton, and Richmond. Spots are limited though and many programs already have, or will sell out!

Discover Hockey is a beginner program for adults who want to learn to skate and play hockey in a safe and fun environment. Learn all the basics of skating and game play without the fear of being judged, form life-changing bonds with your new teammates, and join a league as a team to play hockey in a real season!

Discover Hockey beginner adult hockey classes are currently offered in Calgary, Edmonton and Richmond, BC. If you and your friends want to take the program please visit the schedule pages. Save $50 per person when signing up with two or more friends with the Buddy Bonus!